Although I slept for over ten hours that night, I was still tired the next morning. Fifteen-mile hikes do that to you, I suppose. As I stretched my aching legs, I wondered if hiking the four highest Northeastern high points back-to-back-to-back-to-back was really the best idea. What's more, the weather up on Mt. Mansfield was slated to be just as grim--though less windy--as Marcy was yesterday. Perhaps I ought to have taken a rest day... but this motel was already breaking my budget, and my reservation at Katahdin wouldn't budge.

And so I decided to drive to Mansfield, at least, and see how the weather looked (and how my legs felt) when I got there. The trail up Mt. Mansfield was less than half the length of Marcy’s (only 6.6 miles round-trip), so I figured I could manage it even in slightly-suboptimal conditions. If all was good, I'd climb; if not, I'd camp nearby and wait it out.

After a lovely 45-minute drive through the Vermont countryside, I arrived at the logically named Underhill State Park and paid the $4 day-use fee. As I assembled my gear in the parking lot, a pack of  local college kids drove in and (noisily) started up the trail. I waited a moment, so as not to start right on their tail, then headed up myself.

My journey to Mansfield's summit, the highest of both Vermont and the Green Mountain chain to which it belongs, began on the Eagles Cut trail. 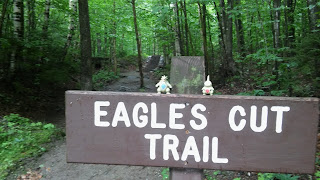 From the parking lot, the trail headed up in a more or less straight line through the lush mixed forest of the mountain's lower slopes. Several times it cut across an old CCC road that switchbacked up the same terrain. Presumably that road used to offer access to the summit trails, but for some reason it was closed.

Half a mile later, I arrived at the high hub from which the summit trails branched out. 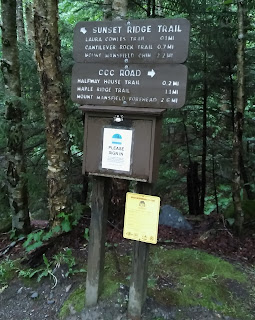 I signed in at the register (like the one at Marcy, it featured signs in French as well as English), then, on the ranger's recommendation, headed up the Sunset Ridge Trail. 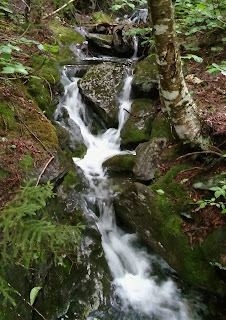 on well-built, wooden bridges, then veered uphill towards the eponymous ridge. From then on the going was rocky and steep, even more so than at Mt. Marcy. To spare my shoes the mud (since the mountain was still drenched in yesterday's rain), I took to stepping from rock to rock, ascending the mountain's natural staircase.

About a mile in, I passed the pack of college kids--and to my half-horrified amusement (or half-amused horror?), one of them was blasting music from his phone. Prospective hikers, take heed--this is a major trailside faux pas! Not only does it mark you as a total wilderness noob, it also disturbs both the wildlife and your fellow hikers' peace. Even if your group was the only one there, you'd still be taking away from your own experience--it's awfully hard to bask in the fullness of nature's beauty while drowning it out with Top 40 pop. Oh well. At least those teens, unlike the ones on Marcy, were properly dressed for the weather.

Shortly after that unfortunate encounter (and around the trail's halfway point), I stopped for a break beside the day's first large rock outcropping:

Until this point the vegetation had been a fairly even mix of deciduous trees and conifers, but after that the evergreens won out. The trail continued steeply upward through several pitches of rock-scrambles. None of them were particularly long or exposed, but some were tricky enough that I had to pause to figure them out. The worst would have been impossible if not for a set of "steps" in the rock that were nearly invisible from head-on.


I emerged into krummholz-land about a mile from the Chin, Mt. Mansfield's highest peak.

The mountain, as you may have guessed, is thus named for its resemblance to the profile of a human face (other peaks along its long, narrow ridge include the Forehead, Nose, and Adam's Apple). I wish I could confirm the likeness, but, like an anonymous reveler, the face was masked in clouds that day.

With the clouds came high winds, though not as high as yesterday's--a good thing, since I spent more than twice as long above treeline. That first exposed stretch was particularly gusty, but after that the winds died down a bit, not to pick up again until I reached the summit. From that point on, the trail traveled mostly over rock slabs of varying steepness. I passed through several pockets of trees, ranging from full-sized groves: 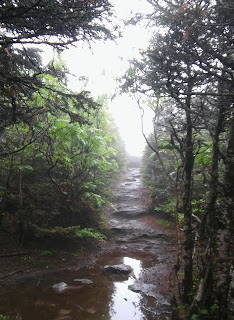 and then, at last, into the tundra: 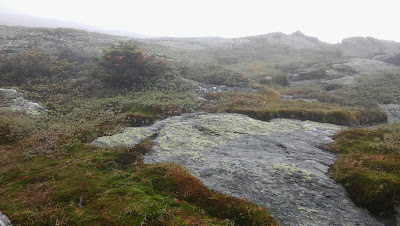 Soon after this, my trail ended at the Long Trail, which would take me to the summit. The Long Trail is a 270-mile trail that travels the length of Vermont along the ridges of the Green Mountains. Often compared to the Appalachian Trail (and coincident with it for 100 miles in southern Vermont), it is the older of the two and inspired the latter's creation. It traverses Mansfield's entire ridge--a beautiful hike, I'm sure, in clearer weather--but in today's conditions I was glad to only have .3 miles to go until top of the Chin. 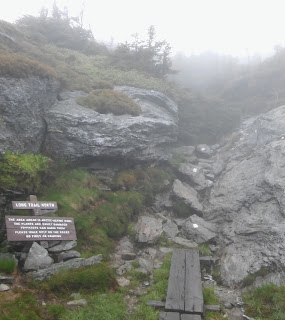 As I walked, a mist slid over the trail, dropping the visibility to perhaps thirty feet: 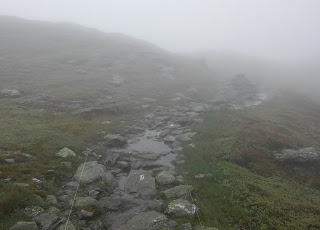 a bit disconcerting, but not so thick that I couldn't follow the white blazes to the summit.

The top of Mansfield was minimally marked, with nothing but a USGS survey disk and a triangle carved into the stone. 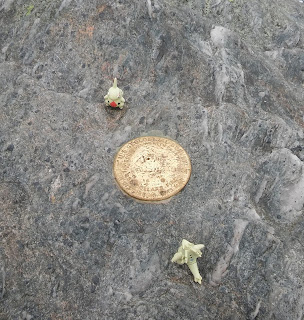 As I photographed the place, a pair of dark-eyed juncos flew past me and landed on the rocks below. Their slate-gray feathers nearly blended in:

I wondered if they were lost, carried too high by the rough storm-winds and stuck in this blinding mist? Or was this their home? Did they make their nests in the tiny krumm-branches, guarded from predators by the fierce alpine conditions? Perhaps they did. As I later learned, juncos are one of the hardiest American sparrows, and their summer range extends as far north as the Arctic tundra... and, apparently, as far up as its alpine look-alike. At any rate, juncos were the only bird I saw at or near each of the four high summits I visited.

Aside from birdwatching, there wasn't much reason to linger on that desolate mound of rock. I headed down, backtracking o'er the rocky slabs and through the intermittent trees.

On the way down I passed the now-fragmented party of kids. The conditions seemed to have sobered them up--or else the music-phone's battery had run out--and now they were climbing in focused silence. To my surprise, I also saw several other hikers as I descended. Mt. Mansfield must be a popular hike to attract so many people even in this weather.

I descended without much trouble to the treeline. The rock scrambles just beneath it were tricky in reverse--I had to turn around and downclimb a few--but ultimately doable. I bounded down the rest of the trail, feeling surprisingly energetic, though footsore, and arrived at my car a little over three hours after I'd begun.

Since it was only midafternoon, and since my next destination, the White Mountains of New Hampshire, was only a few hours away, I decided to drive on rather than spend the night at Underhill. I pulled up a list of hotels on my phone (as mentioned in the last post, I had a wonderfully clear signal here) and discovered that there was a hostel in Conway, NH that charged little more than the average campsite fee for a bunk and shower access. Awesome, I thought as I booked myself a bunk for the next two nights. Why don't they have these places everywhere?

And so, pondering the sad state of the North American hospitality industry, I bade goodbye to Mansfield and headed east.