The only problem with my pizza-plan, you see, was that there was no civilization within fifty miles of the Adirondack High Peaks.

Though I pulled over in each tiny hamlet I encountered on my way out of the park, none of them had a reliable phone signal, let alone 4G for maps. I had no idea where I was going at this point--all I knew was that Mt. Mansfield, my next high point, was east of here, and that the bridgeless expanse of Lake Champlain lay in between--so getting that data signal was my first priority. But there was none to be had all the way to the interstate. I got on I-87 southbound, thinking I could just head back to town where I'd lunched on the way up. After a few miles I pulled into a "text stop" to confirm my hunch.


While I fired off the usual "Hi Mom, I'm still alive" texts, several emails popped into my inbox. I flipped over to see what they were: spam, spam, newsletter, spam, and holy cow my Gmail account had been hacked. Google had blocked the illicit access, they informed me, but whoever it was had still cracked my password, so I had to-

The data signal blinked out of existence.

I ran to the window--no good. Outside, then. I rushed past the other travelers and out the door, raising my phone to the sky. Two bars of voice, but no data. I was stranded, and those hackers had my password.

That email account held nearly ten years' worth of communications, all my chat logs dating back to high school, and even this very blog. Its password was unique, but I'd used it as the password-recovery email for every account I'd made since 2007--online banking, insurance, tax preparation... not to mention my entire online presence. If those hackers got around Google's watchdog algorithms on their next try, they'd essentially own me.

Why now? I (mentally) shouted to the blank and signal-less sky. Any other week and I'd have been cocooned in Northern VA's near-seamless 4G network with ready access to my laptop and my cybersecurity-geek friends. Two days earlier and I'd have been passing through downtown Pittsfield, MA; a day later and I'd be... well, halfway up Mt. Mansfield, but with a reliable signal nonetheless. But here, without that signal, I couldn't do a thing. By leaving the Internet's reach, I'd effectively abandoned my online assets to passive protections--which, while largely reliable, weren't foolproof.

There was nothing to do but drive on to the nearest town and pray they had data. Based on the scanty Maps still loaded in my phone from the last time I 'd used it, I tried the next exit to the south (not that I had much choice, since there was no way off the southbound interstate at that rest stop), but found no signal there either, only a gas station charging $2.74/gal. Yikes. I checked the Maps again; there were no larger towns for nearly fifty miles to the south. What's more, each mile I drove in that direction took me farther from Mt. Mansfield. The best course of action, I belatedly realized, would have been head north from the beginning. So I got back on the highway, retraced the last few miles of Sunday's drive, and continued on towards Essex, the only town large enough to show up in urban-gray on the maps.


Essex also turned out to be the docking point of the ferry on which I'd planned to cross Lake Champlain--a good thing, because I realized not long after reaching that tiny town that any shot I had at pizza and a cheap bed lay across the lake. I'd hoped to save the hassle of crossing for the next day, but seeing as Essex had all of one restaurant (seafood--ugh) and zero lodging in town, I didn't have much of a choice. So I rolled down to the docks, bought a ticket (the last boat had left fifteen minutes ago, and the next one wasn't due for 45, so I was the first passenger to show up), and pulled into the loading pattern to wait for the ferry. While I waited, on the off chance that this place had a data signal, I pulled out my phone...

...and there it was, two tenuous bars, weak and intermittent but undeniably there.

I hopped onto that signal like stink on sweaty hiking boots. As fast as possible on my clumsy phone keyboard, I logged in, changed the password, and checked my inbox for signs of tampering--but nothing was out of place. The attackers hadn't gotten inside. I took a few moments to bask in the relief, then returned to business and reserved a motel room across the lake. From that point on it should have been smooth sailing, right?

Tell that to the surf on Lake Champlain.

The ferry arrived not long after I got my digital business squared away: 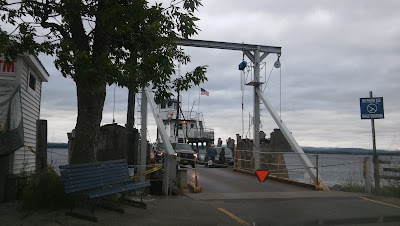 Following the crew's instructions, I drove my car onto the deck, then parked and waited for the launch. So far, so good. But as the the boat left the dock, I realized that myself, most of my possessions, and the car to which I was strapped were more or less stuck on that swaying platform in the middle of a giant lake... and if anything went wrong, it would all go down. Quite an unsettling feeling for a landlubber like me. So I stayed inside the car with my hand on the parking break (for all the good that would do), and watched the waves churn.

To be fair, the views were actually quite nice from the middle of the lake. Looking back, I saw the Adirondacks:

And before me were the Green Mountains of Vermont:

After a thirty-minute ride, we pulled into the harbor of Charlotte, VT. As the first to board the boat, I was also the first to disembark. I led the long line of cars east to US-7, where we dispersed. Two hours of driving through rain (and one pizza) later, I arrived at the motel in Colchester, a northern suburb of Burlington and the only place I could find a decent room for under $85, and fell right to sleep.

As I'd discovered in my frantic quest for pizza, cheap lodging, and a data signal, the human geography of New England is much less friendly to the budget traveler than that of the South or Midwest. The population density goes straight from expensively populous (around the coastal cities) to expensively sparse (everywhere else), with very little in between. Very few towns in the interior are large enough to furnish recognizable road conveniences (such as fast food and cheap motels rather than ambiguous general stores and sit-down restaurants and pricey bed & breakfasts). Even if you can find somewhere to eat and stay, parking is a challenge; most towns predate the automobile and haven’t done much renovation since, so their lots are inevitably tiny, odd-shaped, or both. All in all, it’s not a place a stranger can easily wander into and find what they need.

And aside from its natural beauty, I do wonder why anyone lives there. I saw very little farmland, no large office buildings, an old factory or two, and only a few resorts—the rest of the economy seems to be just local services. I don't see what they'd export. But hey, who am I to uproot precedent and cast people out of their ancestral homes for logic’s sake? Most folks who live here just live here, I’d assume, and don’t often wonder why.