I crossed the Hudson River on I-84 around noon, then turned north onto Taconic State Parkway. From the name, I’d expected an arrow-straight toll road, but it turned out to be the love child of the Blue Ridge and Fairfax County Parkways, with Mommy’s meandering curves through scenic hills and Daddy’s kamikaze speed demons taking said curves at 20 mph over the limit. Despite the wackos, I rather enjoyed the drive… so much that I missed my turn (though I swear it wasn’t labeled) and drove several miles farther north than intended. But there's no lack of roads through Massachusetts--even the rural bits--so I soon regained my course.

The correct road wound through a narrow gap in the Taconic Mountains, then slid down a shady rural valley. Much of it belonged to the Mt. Washington National Forest (named for the Massachusetts peak of that name, not the New Hampshire one). Eventually the road turned to gravel, just like in the national forests back home, then arrived after a few miles at the Mt. Frissell trailhead. I parked at the little pull-in, got my stuff together, and set off down the nearest trail.

A hundred feet in I stopped to glance at a map posted beside the trail by the Appalachian Mountain Club, the folks who maintain the AT and other nearby trails in the Northeast. Good thing I did, because I was headed in the wrong direction. That trail led east to Bear Mountain, Mt. Frissell’s next-door neighbor and the highest summit in Connecticut (though not the highest point--more on that later). I reversed course, crossed the road (and the state line), and headed up the correct trail.


I didn’t expect 2453-foot Mt. Frissell to be much of a challenge—which, of course, meant it was. It started off easy enough: an even, level walk through some beautiful deciduous woods that reminded me of the Blue Ridge forests back home. Budding mountain laurels (the state flower of Connecticut) lined the trail. So far, so good. 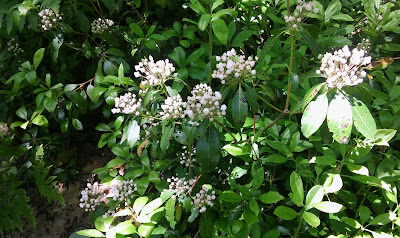 Then things got rockier... and steeper... and before long I found myself staring up at the toughest rock-scramble I had yet to see on this trip.

Naturally, I'd forgotten to swap my worn-down running shoes for anything with traction, and I was stuck carrying my water bottle by hand. That's what I get for underestimating Frissell. Oh well; I ascended as best I could. Along the way I passed an older woman coming down. I asked her if it was this steep all the way up. She laughed, then replied, “Well, it’s flat at the top.” Not the answer I’d hoped for, but the one I suppose I deserved.

What stuck with me, as I continued up, was how casually she’d answered—as if to say, “Of course it’s this steep. It’s a mountain, you little Southern twit. Were you expecting a stroll through a field?” In a sense, I was… but more on that later.

That woman was one of three other parties I passed on my hike, all of whom seemed to be highpointers. It was the first time on the trip that I'd found myself in such company. All of us--her husband and son, a solo hiker from New Hampshire (a fellow fan of Mt. Washington), a pair of young guys who were playing some geolocation game on their smartphones, and myself--had scrambled up here just to see that little brass disc on Frissell’s southern slope.

The southern slope, not the summit--and thus the minor discrepancies running through this post. Though Mt. Frissell is home to the highest ground in Connecticut, it tops out just across the border in Massachusetts. The high point of Connecticut is therefore not a mountaintop, nor even a subpeak, but a mere point on the border running across Frissell's flank. Given how many high points are close to state lines, you'd think this would be common, but there's only one other such high point: Oklahoma's Black Mesa. Maryland's Hoye-Crest and Nevada's Boundary Peak come close, as subpeaks of larger mountains (WV's Backbone Mountain and CA's Montgomery Peak, respectively), but they're still their own summits. You can draw a contour line around them that encircles no higher ground. Not so with Connecticut and Oklahoma's high points, though: a single step across the border takes you higher.

This raises an interesting technical quandary: if we were to exclude the border from a state's territory (topologically speaking, if the set of all points within a state was open), then neither Connecticut nor Oklahoma would have a highest point.

Allow me to explain. Assume a locally constant slope, so that as long as you are sufficiently close to the border in our region of interest, anywhere closer to the border than you are will also be higher than you. However close you get to the border--without standing precisely on it, since the border is outside of the state--there would still be a gap between you and the border. 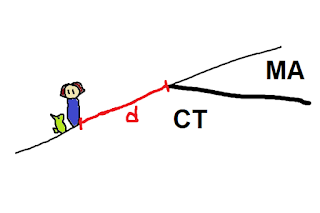 Since everything in that gap is closer to the border than you, it's also higher, so you're not standing on the high point. But that gap isn't on the border either, so you can step forward into the gap, remain in the state, and gain some elevation... 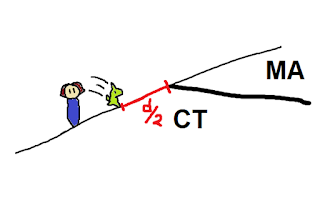 but even then, there's still a (shorter) gap between your new position and the border, and thus there's ground within the state higher than your new position. The same will be true no matter how many steps you take: 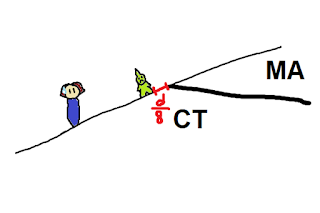 You'll get infinitesimally higher with each step and infinitesimally closer to the border, but you still won't be at the highest point. It's Zeno's paradox in two dimensions (distance and height). The only way to solve this is to bring the border back into the state and stand on top of it: 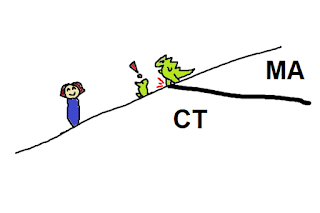 Despite these technicalities, I kept scrambling up the steep side of Frissell. Several minutes after passing that woman, the trail flattened out onto a subpeak topped with low trees and streaks of bare rock—a Northern wooded bald? 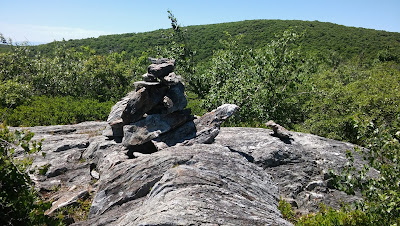 I rock-hopped across the clearing, then continued upwards to Frissell itself. Its summit was much like the knob below: sunny and marbled with slabs. I paused there, then continued on to the CT high point.

The views on this last stretch were great. Below me lay the Connecticut countryside, all pond-dappled woods fading into the hazy horizon: 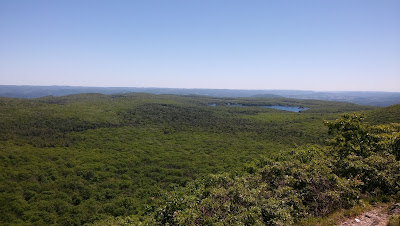 To the east rose the great green hump of Bear Mountain: 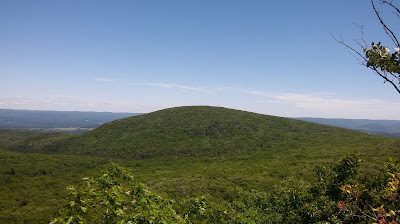 And to the south, a quarter-mile down the trail, lay the high point.

There wasn’t much else in the small clearing, just a cairn and logbook. If the trail hadn't ended there, and if that fellow from New Hampshire hadn’t been signing the logbook as I arrived, I might have walked right past it. I took a break, signed the book, and let the Lars munch on the rocks (but not the cairn!—that’s not polite), then headed back... up? Temporarily.

Despite the tricky footing, I descended much faster than I'd climbed up. 9.8 m/s^2 of free acceleration in your direction of travel is quite helpful for that. In retrospect, I probably should have taken it slower, given all the hikes I had ahead of me. But retrospect is always late with its warnings... plus I miiiight have been imaginary-one-sided-racing that guy from New Hampshire. What can I say; the cross-country impulse lives on. At any rate, I made it back to the trailhead in just under two hours. A brief direction check, and I was off again for Massachusetts.