Western Massachusetts was an interesting place, a prelude to the northeastern countryside I'd spend the rest of this leg driving through. At first glance, it was much the same as any other mountain-land I'd seen, but subtle differences revealed themselves as I drove.

New England was full of old, small towns whose boundaries seemed almost to overlap: each time I left a town the next one was just a few feet down the road. (I didn't discover until I got home that in Massachusetts and Connecticut, "town" refers to a subdivision of a county, not necessarily an urban area.) What development there was was sparse yet evenly spread through the land. The countryside was rural, but on an entirely different scale from the vast, machine-shaped fields of the South and Midwest. The (literal) towns were made of small, old buildings joined by narrow streets. I could tell most of it hadn't been built with this century in mind. There was less fast food and fewer chain stores than I'd seen elsewhere in the country--though a lot more hipsters--and the few churches I saw all seemed to be historic.

I'd planned to camp on Mt. Greylock that night, so I picked up dinner in Pittsfield, then rushed on to the mountain's visitor center. I would have stopped to eat, but I didn't want to arrive too late to get a site. My instincts were right in that regard, but not enough, as it turned out...

The high point of Massachusetts, Greylock is another Taconic summit, though it's often grouped with the Berkshire Hills, its eastern neighbors. Its prominence and accessibility to the coastal cities of New England led many literary figures of the 19th century to visit in search of inspiration, from Hawthorne to Thoreau to Melville. The snow-covered mountain is said to have reminded the latter of a sperm whale's back. Since then the mountain has been alternately monetized and preserved by a variety of loggers, conservation groups, and ski lodges. Modern use falls on the "preserve" end of the spectrum--the whole mountain is managed by Massachusetts as a state park--but they haven't entirely given up on monetizing the place.

I pulled into the visitor center's parking lot at 5:15 PM and walked up to the doors... which were locked. The place closed at 5. Even in the summer, with peak park traffic and a good three hours of recreation-friendly sunlight still to go. So much for reserving a campsite, or even picking up a trail map.

Rather than hike without one, I continued up the mountain by car. The summit road ran up the gentle southern slope of Greylock through a tunnel of trees. It crossed trails frequently; each junction was announced (somewhat unnecessarily) with rumble strips. Strike two. Halfway up the mountain I passed the camping area, where a sign informed me that reservations were absolutely required--oh, and by the way, camping anywhere else in the reservation was expressly forbidden. There went Plan B.

The road climbed higher, spiraling about the mountain. I stopped at an overlook on the east side, from which I looked down onto the valley between Greylock and the Berkshires. In between lay the town of Adams, Mass. and its old limestone quarry (The Lars salivated. No, I told them, we’ve already got dinner). 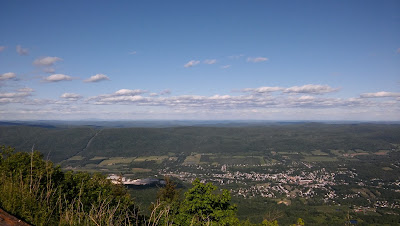 I took some pictures, then continued up the road to its conclusion atop the mountain—in a pay-to-park lot. Strike three.

So I backtracked down the road to the next-highest lot, which turned out to be right along the Appalachian Trail. I followed the white blazes up the remaining .4 miles to the summit: 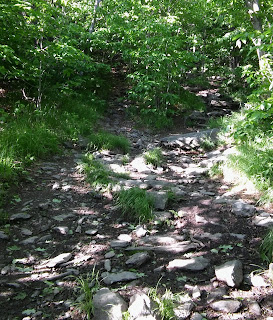 The trail was rocky, but not exceptionally so: more like the trails back home than what I'd seen that afternoon at Frissell. In fact, Greylock reminded me of nothing so much as Mt. Mitchell. The trees along the way faded from deciduous to a spruce-fir taiga similar to that of the Blacks and Smokies (but with Balsam firs, not the uniquely southern Fraser firs). For some reason--perhaps that species difference--they smelled pinier than the woods down south, like I was walking through a forest of Christmas trees. Is this the "clean Northern air" over which the locals wax poetic? Though not these locals, I suppose--the forest atop Mt. Greylock is the only taiga in Massachusetts and the first seen by northbound AT hikers since southwest Virginia.

Despite all that, the summit was a bit of a disappointment. I've felt guilty about driving to summits in the past, but this time I was glad I hadn't bothered to hike from Greylock's base. The top was flat and mostly forested, so there wasn't much of a view:
and the one cleared overlook was nearly identical to the one down the hill. 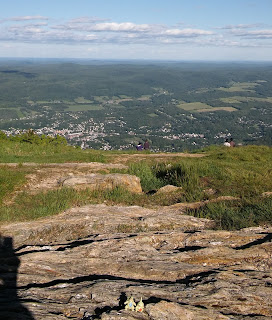 There was an observation tower, to be fair--I assume the views were meant to be seen from there--but it was closed for repairs. Strike four.

Nothing else marked the summit aside from the tower: no sign, USGS marker, or any other photo op to show I'd been exactly there, so I took a picture from just outside the fence, 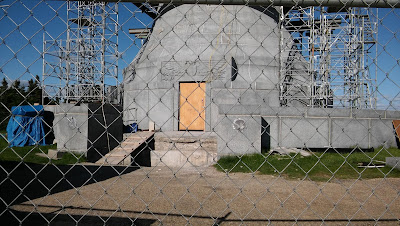 So that was the top of Massachusetts. I admit that my evaluation was somewhat colored by hanger, since I'd been holding on to my supper for over an hour at that point, and I'd been pretty darn hungry when I got it... but even so, I wouldn't go back. New England is home to far more majestic (and welcoming) mountains than Greylock.

I returned to my car, booked a motel room in Lanesborough just downhill (hooray, Plan C), and then, at last, sat down and ate my food. Not getting a campsite wasn't the end of the world, I suppose; they weren't much cheaper than the room I booked, plus I could use a good rest after my three-high-point day. I'd been on the road for nearly fifteen hours at that point, ever since my predawn start in New Jersey, and the next day's drive to the Adirondacks would take several hours more.

While munching, I pulled out the yet-unread copy of Moby Dick that I'd picked up at a thrift store years ago. What better place to start it than here? Well... anywhere with windows. I only got a few pages in before the resident swarm of blackflies forced an undignified retreat to my car. Strike five.