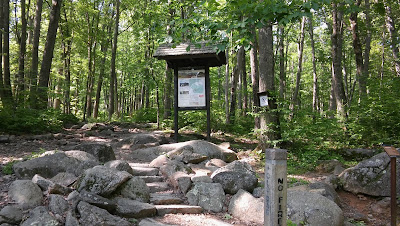 And then I reached the "No Camping Past This Point" sign:

The scramble itself wasn't quite as hard as I'd remembered: either I'm in better shape now than the first time I did it, or I just knew what to expect. I still got some exposure-shakes in a few spots, but I dropped into the little crevice and edged around the boulder at the start just fine:


squeezed through the "stairs" and under the leaning rock without much trouble:


and wasn't too nervous to enjoy the scenery: 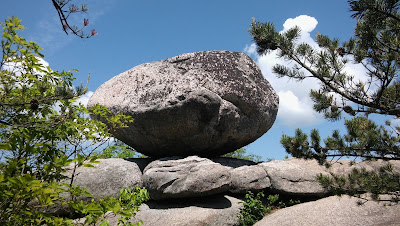 I even found a way around the jump that had bothered me the last time:


The summit area was pretty different with the leaves up--so different, in fact, that I wound up walking right past the "official" summit (the clear area on top of the cliffs that my brother and I had stopped at last time). Instead, I took my post-climb rest a short ways down the mountain, at a spot where I could actually see the cliffs:


From there, the trail goes past some overlooks: 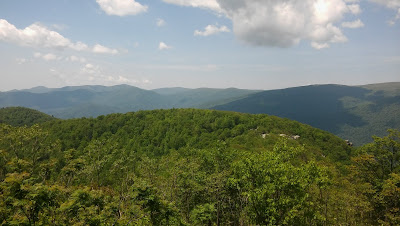 and a couple of shelters: 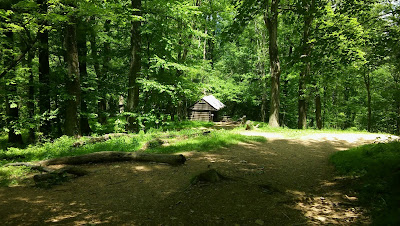 the lower of which isn't far from the junction with the Weakley Hollow fire road, the usual route back to the parking lot.

But rather than head back (having hiked only the 9.2 miles of the standard Old Rag loop), I turned up the Old Rag fire road, which heads deeper into the mountains. 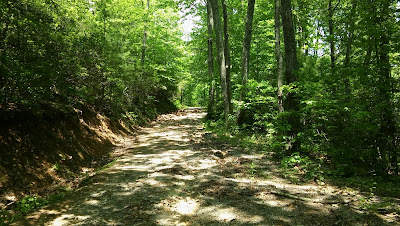 The road (unpaved, but much wider and smoother than your average trail) was quiet compared to the trails on Old Rag. I've always been amused by how soon the crowds drop off, even in popular national parks like Shenandoah and the Smokies, once you step off the beaten path of Famous Tourist Attractions. The views might not be quite as spectacular on the B-list trails, but the overall experience is much calmer.

Unless, of course, the one person you meet along that trail is walking with a set of speakers. Not earbuds, not headphones, but full-on, indiscriminate speakers so loud I could hear them two hundred feet off. And it wasn't just some teenagers on their first trip to the woods who might conceivably not have known any better--no, it was a middle-aged guy with worn-looking gear hiking a practiced pace. Has blasting music become acceptable trail etiquette? Are people so wired-in these days that they can't stand a day hike's worth of silence? I sincerely hope not.

Fortunately, I wasn't stuck next to that guy for too long. I continued up the trail for another mile or so after he passed me, then stopped for a break about halfway up the side of the Blue Ridge, where the road met another minor trail. 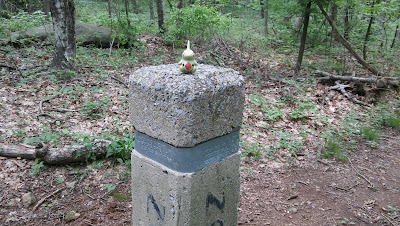 As I rested, I realized that my original plan, to hike all the way up to Skyline Drive and back, would not be particularly feasible with the amount of daylight and water I had left. Plus, I was tired from the morning's scramble--you wouldn't think crawling over rocks would be that much more exhausting than walking up an incline, but it is. So I checked my map, saw that the trail I'd stopped beside, the Corbin Mountain Trail, would eventually head down the mountain, and decided to follow it home.

And that’s when things got interesting.

You see, that particular trail was so remote, obscure, and unremarkable that I must have been the first human who'd walked it in at least a week. And in that week, Mother Nature had been busy. By the time I was half a mile in, the trail was almost completely overgrown, alternating (it seemed) between two-foot-high grass and trackless thicket:


Trees were down all over the place: 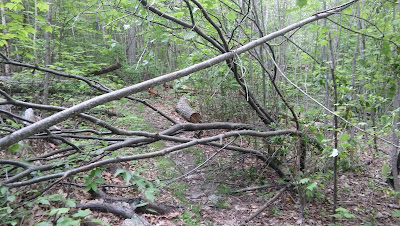 
and there was even a short section where a creek had broken loose from its bed and started using the trail instead:


It wasn’t so bad that I got lost, nor was it bad enough to force me to turn around, but it was a lot more wilderness than I’d signed on for, hiking a marked trail in a national park.

So there I was, bumbling slowly through a particularly overgrown patch:


when all of a sudden, I heard this rustling sound from somewhere in the brush. I couldn't see a thing, but whatever it was sounded big and heavy.

The noises didn't resume. Whatever it was had no desire to show its face. (As intended.)

I kept going--slowly, carefully, singing all the while (so as not to catch any other big heavy things by surprise). After a bit, I came to some switchbacks down a long slope covered in tall, straight trees. I looked down the trail--nothing was in my way. But then I heard another rustling noise and what sounded like something scrabbling up the trunk of a tree. I looked straight out into the forest and saw a little black bear clinging to one of the trunks. (A yearling? Not a cub--I didn't see a mother anywhere.)

It turned, saw me, and climbed higher for a better look.

It hung there for a moment, bewildered, then scrabbled down the tree and bolted.

I've got to say, that sight restored my faith in the natural order of things (after that fearless Jersey bear I'd seen at the Delaware Water Gap). I am human, hear me scream bad Led Zeppelin covers! The only problem was that the bear ran downhill, the same way I was going, so I had to keep singing all the way down the valley to the river at the bottom. Which brought me up short.

Now, I've seen some pretty wimpy water features marked as "rivers" in the mountains, but this was not one of them. It was wide, deep, and fast-flowing, and half of the Official Crossing Rocks were submerged:


I poked around downstream for an alternate crossing. No luck: the stream was rough and deep as far as I could see. So I picked a relatively shallow-looking, not-too-bumpy spot and waded out. That bit only soaked me to my knees. But then the other channel of the stream, across a poison-ivy-covered island in the middle, not only soaked me to the bottom of my shorts--and I was wearing pretty short shorts--but nearly knocked me over with the force of the current. Again, a nontrivial stream crossing was not what I'd expected to find on a marked trail in Shenandoah National Park. (In retrospect: we'd had heavy rain for the past few months, so it's probably not that bad most of the time.)

Once across, I followed the Nicholson Hollow trail (a much better-established one) down the valley, parallel to the stream. The two crossed again at another sketchy half-submerged ford about a mile down:


and then another stream joined them a few hundred feet on. But that was the last of the excitement for the day. Half a mile later, I emerged from the woods onto Nethers Rd., from which it was just a short walk (albeit in wet sneakers) back to my car. 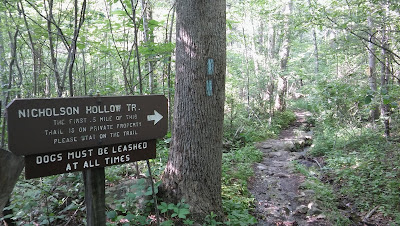 All in all, that loop took me through about 14 miles of, shall we say, interesting terrain. Not quite the same challenges I'll face out west--I hear they've got a drought going in Colorado, New Mexico, and Arizona--but I figure it's good practice nonetheless.