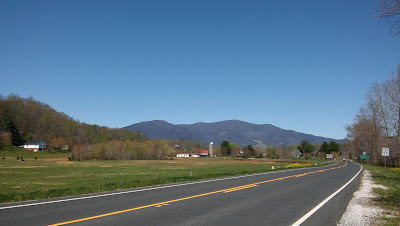 The climate down there was much the same as it had been back home in NoVA: temperatures in the lower 60s, redbuds blooming, leaves just starting to expand. As I sorted out my gear, I reflected that it might have been better to wait a few weeks for those leaves to grow out and shade the trail--as it was, I'd be courting sunburn on this afternoon-long hike. But I was here now, and the half-grown, pale-green woods were inviting in their own way, so I headed up nonetheless.


In retrospect, I'd say this is actually the best time of year to hike The Priest. I'd heard the route--a four-mile chunk of the Appalachian Trail that rises 3000' from the Tye River gap to the summit--described as a knee-busting slog through a bland, viewless stretch of forest. With the leaves out (and a heavy pack on), that'd be just about right. But in mid-April of a cold spring, with wildflowers covering the forest floor and the steep-sided Three Ridges visible just across the gap, the going was quite nice.

The trail started off with a gentle but persistent climb up the side of a V-shaped valley. After a half-mile or so, the stream that carved the valley came into view, way down in the distance. As the trail went on, the valley narrowed, and the stream rose up to meet the trail: 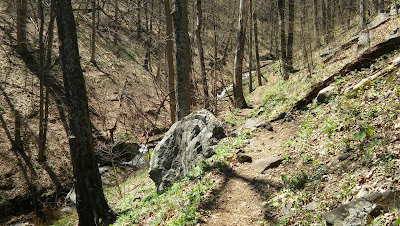 which, after crossing two shallow tributaries, forded the stream:


The trail continued up the far side of the valley and around to a saddle on the northeast-southwest-running ridgeline of The Priest:


As I mentioned earlier, there was never an unobstructed view across the gap, but some spots along that stretch of trail came pretty close to it:


The trail swung around to the east slope of the mountain for a while, then switchbacked its way up onto the ridge. I passed a few other groups of hikers around that point, most of whom were geared up for overnight trips. I doubt they were AT thru-hikers--they'd have to have covered the 750-odd miles from Georgia to here in about a month--but I'm sure this area is popular for section hikes. I also passed a good east-facing overlook, but it was full of people and I planned to return along this same trail, so I kept on going.

From there on, the mountainside got so steep that there was only one way to go:


The trail ran along the ridgeline for a while, then lapsed into switchbacks again once even that grew too steep for comfort. I kept hoping for a scramble section--they could have easily stuck one in by clearing the lichen off one of the many clumps of boulders along the way--but nope, this trail was built for people carrying 40-pound packs.


And built well, I've got to say. Even though I'd gained thousands of feet since the trailhead, it wasn't until the last half-mile of the ascent that the incline got steep enough to slow me down. I stair-climbed my way up that final rocky stretch, doing my best not to slip on the remains of last year's leaves, until the trail finally leveled off, leaving me at the summit.

The woods up there were sunny, sparse, and grassy--had this area once been a bald? 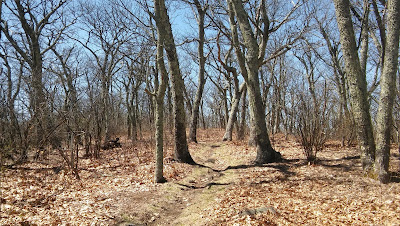 Not noticing a summit marker (I don't think there is one) or any obvious stopping point, I continued on down the flat ridge-top until it started to dip, then backtracked to a clearing at the northeast end of the summit. A faint path led off through the woods to an overlook of sorts atop some boulders:


I rested up there for a while: 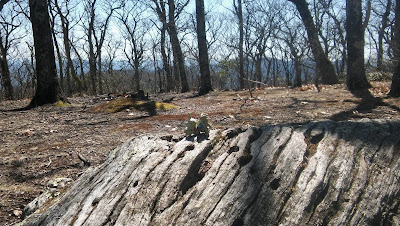 then headed back down.

Before I'd gone far, I spotted a patch of bare rock on a distant shoulder of the mountain: 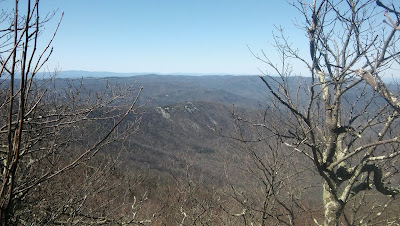 Could there be climbing or scrambling down there? Hard to say from that far off... but the next time I'm in the area, I just might bushwhack over to find out.

The eastward view was quite a sight as well, when I descended to it:


I didn't stay long, though: the way up had taken me about two hours and fifteen minutes, so I challenged myself to get down in less than two hours. The steady, gentle incline now worked in my favor; the trail flew by beneath my feet. I bounced down the ridge, swung along the sides of the valley:


and landed right back where I'd started, a bit before 5 pm. Success!

At that point, the sun was still fairly high in the sky, and I had no burning desire to get home. I'd noticed while researching this hike that Crabtree Falls, one of those day-hike spots so famous that even not-so-outdoorsy folks around here have heard of it, was pretty close. I checked the map beside the trailhead: sure enough, it was right up the road.

And so I hopped into the car and headed over... 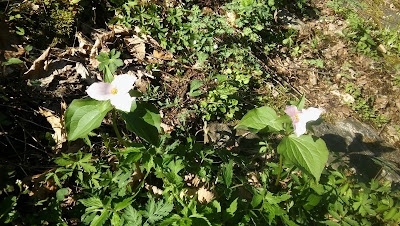