The rest of the trail was rougher--as it had to be, given the terrain--but still quite carefully maintained.

After a couple tenths of a mile (yes, the mileage was labeled that precisely on that trail), I came to the first of the falls' several cascades: 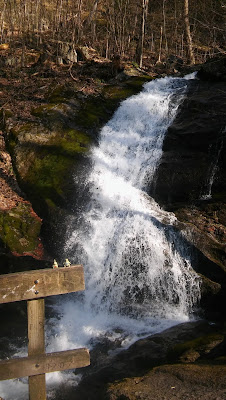 From there, the trail veered off from the falls and switchbacked up the mountainside:


Where it returned to the falls was a second overlook, this one with a much more comprehensive view:


I looked my fill, then headed up more switchbacks, passing beneath a handful of interesting cliffs (and the gaze of a park ranger--no, LarLar, don't even think about taking a bite).

The trail continued up some steep stairs of yellow wood and past a third viewpoint: 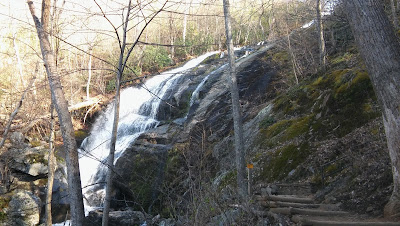 then up a few more switchbacks to the final overlook:


The trail continued on from there, following the now-sedate stream farther up the mountain: 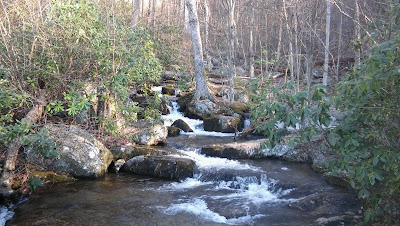 But the improvements stopped there, and my legs were starting to stiffen up from all the hill-climbing I'd done that day. I rested for a moment, looking out at the steep, still-leafless walls of the Blue Ridge around me:


then headed back down. 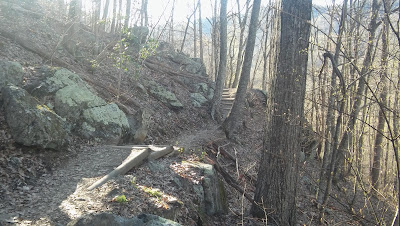 I'm glad I thought to visit the Falls outside of peak season--I bet lines form on all those ladderlike stairs in the summer. But I understand why, with cascades like that on display. And the trail to the top is about as accessible as the terrain surrounding a thousand-foot waterfall can possibly be. It'd be a great place to take kids... once they're old enough to consistently obey commands like "Stop right there!" and "Don't you dare climb that guardrail!", of course.

Some final food for thought: Not far from the start of the trail, there's a little fenced-off cemetery, home to two former owners of the land the falls is situated on. Up in this isolated, thin-soiled valley, their lives must have been quiet and full of hard work. I wonder what they'd think of all the crowds that come here now for entertainment?