About two weeks ago, on the recommendation of SummitPost's Eastern States Climber's Peak List, I ventured north to central Maryland to hike Annapolis Rocks. I had never heard of the Rocks before, but if they'd made it onto that list--in the company of Katahdin, the Presidential Range, and Old Rag Mountain, among others--I figured they must be worth seeing. Even if they were in Maryland.


But what the Rocks lack in elevation, at a measly 1700', they make up for in accessibility. They lie just off the Appalachian Trail on the slopes of South Mountain (a long, flat-topped ridge much like the Massanuttens in Virginia), about two and a half miles north of I-70. East of the mountain, farm country descends to the growing exurb of Frederick, MD; to the west, steep slopes look out upon the Cumberland Valley, northern neighbor to the Shenandoah. In other words, the country seemed fairly familiar to me, right down to the white-haired farmer waving at my car as it passed through the village of Wolfsville.

My original plan had been to approach the Rocks from the north, starting about six miles up the AT at the next road crossing, and make a full-day hike of them. However, I wound up starting late (though not late enough to avoid the tail end of the Beltway's morning rush hour) and arrived around 11 at the trailhead--well, at the mountain gap where Google Maps had claimed there was a trailhead. I didn't see a thing as I drove by.

We'd had a late snowstorm about a week ago, you see, and while the snow back home had long since melted and gone, the ground up here still held a good four to six inches. The shoulder was packed even higher--if that's where I was supposed to park, I was out of luck.

I turned around and re-crossed the mountain--still didn't see a lot--then turned again and crossed a third time, and there it was: an unplowed driveway leading to a tiny lot I'd taken for someone's yard. I pulled in and followed a line of wheel-ruts to a mostly-packed-down parking space. The car made some interesting crunchy noises as I stopped, but whatever. At least I'd made it here. 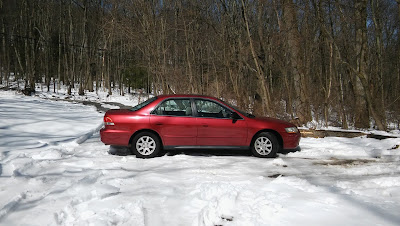 I hopped out to inspect the trail. It was no clearer than the parking lot--rather worse, in fact, what with the random footprint-bumps all over the place. I followed it back to the road to see if it got better on the mountain itself, but it didn't. That way wouldn't work with my decidedly three-season trail runners; nothing to do but drive around to the other side and try the short, south-facing route to the Rocks. If any trail on the mountain was tractable, it would be that one.

The only problem was, my car wouldn't budge from the mud-hole I'd quite unintentionally mired it in while parking. When I hit the gas, the front wheels just whizzed around, digging themselves deeper into their rut and spraying slush into the air. I got out, shoved fresh snow beneath them, poked the hard snow out from behind my back wheels, and tried a second time: a few inches' progress, then I was stuck again. I drove forward, angling the wheels away from the mud, then scooted back ever so slowly... stuck. Forward, turn, backward, stuck. Repeat.

After a few dozen iterations of that process, during which I heartily repented of the pride that had led me to take a low-carriage, two-wheel-drive sedan off-road in four inches of snow, I finally swung around and onto the wheel-ruts leading out of the lot.


So yeah. Never take plowed parking for granted in the mountains, and thank your local snowplow drivers the next time you see them.

One uneventful fifteen-minute drive later, I pulled into the shoulder-lot just off US-40 for South Mountain State Park. Sure enough, the lot was clear, as was most of the ground on this sunny side of the mountain. 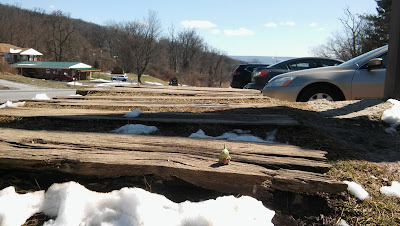 I left the car and followed a weird little paved spur trail (formerly a road surface, by the looks of it) down to the spot where the trail crossed I-70:


To my surprise, given what I'd heard of the AT's wilderness-seeking tendencies, the northbound trail ran alongside the highway for about a quarter mile:


before it turned up the hill and into some quieter woods. The ground around the trail grew steadily snowier, though the trail itself was largely clear for the first mile or so. 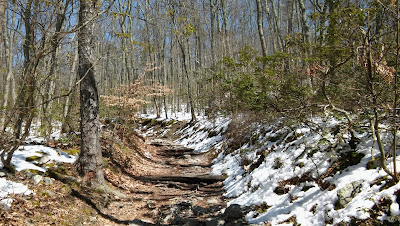 That all changed once it crested the ridge. Up there, slush was the norm, with puddles and solid snowpack as the two extremes. Traction was slim to none, and before long my shoes were soaked. At least the air was fairly warm--in the upper 40s, I'd guess. And slogging through that stuff was hard enough work to keep me warm.


After another mile, I arrived at the junction with the spur trail to the Rocks: 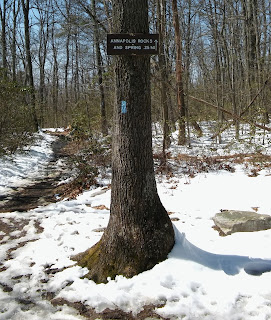 I'd heard there were some other rocks up the trail, though, and I wanted to add a bit more distance to my hike, so I continued up the AT for another half-mile or so until I came to these beauties: 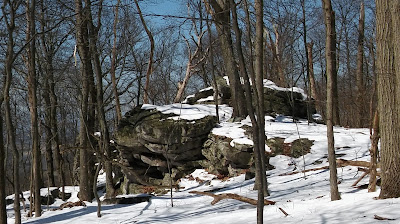 Keep in mind, I hadn't yet glimpsed Annapolis Rocks itself; this was the biggest outcropping I'd seen all day on the otherwise-gentle slopes of Maryland. I followed some footprints off the trail and up onto the rocks:


I scrambled around a bit--carefully, since my shoes were soaked--then turned back and headed down the spur trail to the actual attraction.


As you can see in that picture, the woods around the Rocks are oddly thin. A sign halfway down the trail explained why: they'd all grown within the past fifteen years, during which this area had been carefully managed for reforestation. Before that, the Rocks had been stripped bare by the hundreds of hikers and campers who'd descended upon them unsupervised each summer day. They all just really needed wood for their campfires, y'know, to keep from freezing to death in the chill of the 70-degree nights. (Um, no. As long as you're an endotherm, you'll be fine... and if not, well, too bad for you, Congresscritters.)

A few more turns in the trail, and I emerged onto the Rocks:


These cliffs were huge--and not just for Maryland, for anywhere east of the Mississippi. They stretched for a good quarter-mile along the mountainside:


and the outward view was nothing to sneeze at, either: 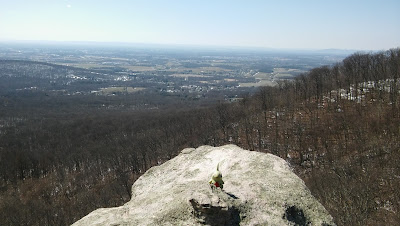 Off to the left, I could see all the way to Greenbrier Lake, tucked into the arms of Bartman Hill across the interstate:


I hung out on the rocks for a while, then explored around the cliffside area. A bit of poking around turned up several gentle scramble-paths down to the base. I went a ways down one, gave the cliffs a judicious look, then hauled myself back up without climbing anything: the rocks were dripping with snowmelt, my shoes were still soaked from the hike up, and it was time to head back if I wanted to beat the evening traffic on the Beltway.

And so the Lars and I hopped down the mountain:


and headed on home.

Fair enough, Maryland--you do have some interesting rocks. And I might just come back sometime when it's dry. 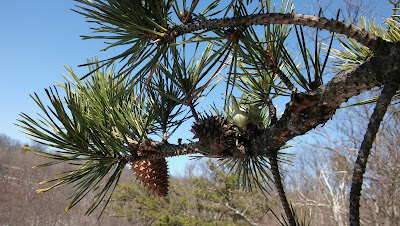