Later that week, once my feet had recovered, the Chattanoogan and I drove up to a place on the Cumberland Plateau called Savage Gulf State Natural Area. Not a gulch or a gully, mind you, but a "gulf." Guess that's the local word for them.


The main attraction on the eastern end of the Natural Area (why they don't just call it a park, I have no idea) is a ~4-mile loop trail that wanders through the woods for a bit, then takes you right along the edge of those bluffs.

It started with a gentle walk through a half-pine, half-deciduous forest:


About half a mile in, we came to this rather elaborate bridge over a tributary of Savage Creek:


It bounced and swayed with our footsteps as we crossed the cloudy, oddly teal waters (a color, Chatt-boy and I agreed, reminiscent of a ghostly aura):


From there, the trail led us on--and ever-so-slightly up--into the woods:


After a mile, we came to the split in the loop; we took the north fork and continued counterclockwise up a gentle rise:


But before the woods got too monotonous, the trail curved us back around to the main attraction:


Through some trick of angles, it appeared to rise into the distance, but the stream that carved it flows away from the viewer, into the west (as one would expect in the eastern half of the Mississippi watershed).

We hung out there for a while, admiring the view:


But before we could get too sleepy:


we continued along the loop.

Half a mile later, we turned onto a spur that brought us down into the gulch. The going was rougher here than elsewhere, but still decidedly Class 1--pets and children, come on down.

At the base, of course, was another stream crossing (on another extravagant bouncy-bridge), this time of Savage Creek itself:


And on the far side of the creek, guess what we came across:


LarLar was a bit confused by what exactly had gone on here; as we walked on, MomMom did her best to explain. "You see, when two Lunatones love each other very much..."

But before she could finish, a crashing roar drowned out her words. We hopped onto a rock, looked down, and saw: 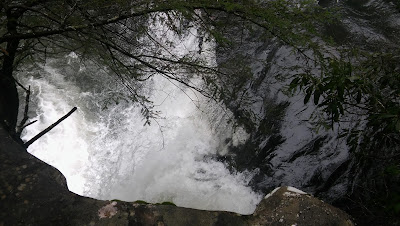 And that's what a rain-filled creek in early spring (climatologically speaking) looks like from above. Crazy how much water falls across that rim each second, isn't it?

From there, we followed the convenient stairs: 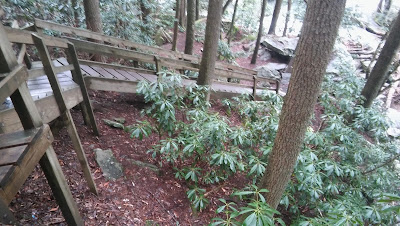 down to the base of the falls: 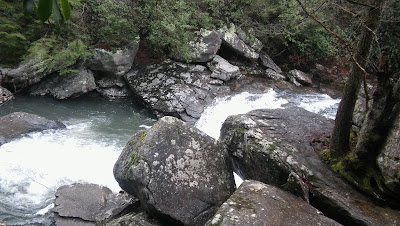 The cliffs around it were rather impressive, but seeing as it had just rained that morning, I kept both feet solidly on the ground:


So yeah, that Gulf looked pretty savage to me. We lingered for a while to admire the waterfall: 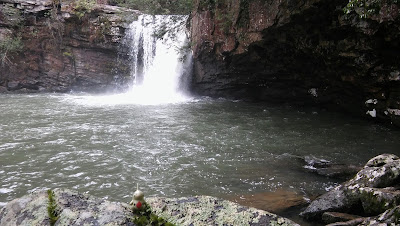 then retraced our steps up to the rim and headed home for supper.