On the way down to visit that Chattanoogan fellow I've mentioned in previous posts, I thought I'd stop by the Smokies for a bit of February mountaineering. I hadn't hiked through snow since my winter ascent of Mt. Washington in 2016, and the ice axe I'd bought after that trip was long overdue for actual use. Plus, what better time to snag the handful of Southern Sixers along the main drag of the Smokies than in the dead of winter? I'd have the mountains to myself, I figured--my own little ice-encrusted wonderland at the crown of the southern Appalachians.

Now, if you've noticed any trends while following this blog for the past two years, you're probably wondering what's about to go wrong. And the answer, my friends, is...


The weather on the high ridge of the Smokies that weekend was perfect for hiking: warm, sunny, and snowless. And I looked like a fool schlepping an ice axe all the way to Clingman's Dome.

In all fairness, I had more or less expected this when I rolled in the day before to a torrential downpour:


I stopped in at the Gatlinburg Visitor Center to ask how the conditions were at 6000'; the ranger seemed a little shocked that I intended to hike the eight miles (!) from US-441 at Newfound Gap to Clingmans Dome (rather than take the seasonal auto road, which wouldn't open until April), but finally admitted it was doable with the right gear. Things were even wetter up there, she said, and they might freeze overnight.

With that in mind, I packed my full complement of winter gear the next morning and headed out around sunrise. Forty-five minutes later, I pulled into the parking lot at Newfound Gap (5046') and found it just as hideously oversized as I remembered:


The skies were clear, the air temperature seemed above freezing, and the ice was confined to a few frozen puddles, so I left most of my winter stuff in the car. But I stashed my micro-spikes and rainshell in my pack, just in case--leaving the latter behind is asking for trouble in the Smokies, and I figured it might well be icier 1500' up--and, on a last-minute whim, I tucked the aforementioned ice axe into my waist-strap. Better safe than sorry, right?

And on that heavily-overprotected note, I set off down the Appalachian Trail southbound: 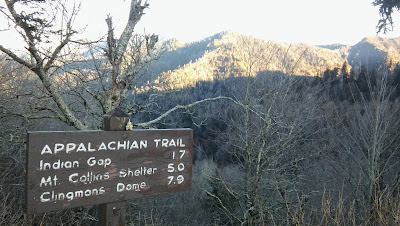 and promptly slipped on a frozen wet log. Not the most auspicious start, but at least I knew from then on to avoid those.

The trail began on the shaded western side of the ridge. I passed several clumps of moss-sicles:


and then, about a mile in, this interesting little barrier (that I'd forgotten since my last trip down this trail):


As I read on the adjacent sign, the slope beyond that fence was a rare beech forest, walled off to protect it from invasive wild hogs. "What about exotic humans?" some wag had scribbled below the text on the sign. Well, we did kill off a lot of megafauna when we first showed up, but we've been a steady presence on this continent for 12,000 years now... shouldn't that earn us a green card, at least?

About a mile later, I hit Indian Gap, the main pass through the Smokies until surveyors discovered Newfound Gap back in the 1930s. (And for once I do mean "discovered for all humanity"--the Cherokee had also crossed the mountains by Indian Gap, hence its name.) 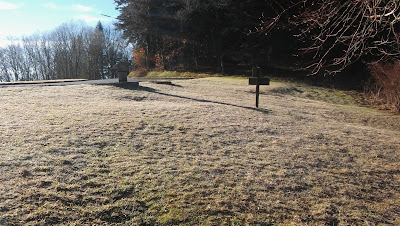 From there, the trail climbed steadily upward through a thick and increasingly wet forest:


over a collection of quaint little bridges:


and, finally, around 10:50, to the top of Mt. Collins, the first of two official Sixers I'd cross on this excursion. The summit wasn't marked, but there was a nice eastward overlook a few feet before it:


On the downslope of Collins, I glimpsed the flank of Clingman's Dome through a gap in the trees:


Only three miles to go. Could I make it there by noon?

Maybe, I thought... or maybe not. The trail dips back down to ~5720' between Mt. Collins and Clingman's Dome, so I had about a thousand feet still to gain. The new (snow) boots I'd bought specifically for this trip were proving somewhat less than comfortable. And after driving up from my near-sea-level home and sleeping at 1000' down in Pigeon Forge, I was feeling the elevation.


But, nonetheless, I stumbled on up the increasingly steep trail: 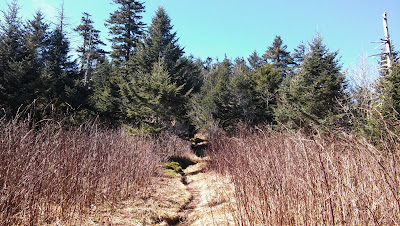 and eventually reached the summit... ish... thing of a "peak" called Mt. Love. Wikipedia lists it on their Southern Sixers page, and Peakbagger names it as a separate summit from the Dome, but I honestly don't see why. It's a flat-topped bump on a ridge, nothing more. But I searched anyway for some sort of apex, some distinctive-looking boulder that rose maybe an inch or two above its brethren... some sign of an actual summit.


Well, you know what they say--Love is awfully hard to find.

A mile or so later, I arrived at the summit of Clingman's Dome. The ground beneath it was the iciest I'd seen all day, but not so bad that I couldn't just crunch through it in my boots.

To my surprise, there were a handful of other hikers at the tower, including a backpacker who'd stopped there for lunch. We swapped a few words about the weather; this lack of snow is unusual, she said, but not outside the norm. You never know what you'll get from the Smokies in winter.

True that. But as I gazed out from the tower, I realized the real benefit of coming up this time of year: clear air.


You won't get views like that through the summer haze.

I lingered up top for a while--the wind was blowing, as always, but not intolerably hard--then headed back down to the AT:


and on for another half-mile to the summit of Mt. Buckley. Like Mt. Love, it doesn't quite make the prominence cutoff to count as an actual Sixer, but at least it looks like a separate mountain.


And the trail between Buckley and the Dome was fun in its own right: the ridge got narrow there, so each gap in the trees revealed a panorama:


But I was parched and tired, and I knew it'd be a long slog back to Newfound Gap, so I didn't stay too long.

The original plan for this trip, you see, was to hit all the Sixers within a day's hike of the park's main road. On top of this sixteen-mile loop today, I'd hoped to tack on another six miles round-trip to Mt. Kephart (rather optimistic, given the ~11 hours of daylight available at that latitude in February), then climb Le Conte by the Alum Cave Bluff trail the next day. But as I trudged on down the trail, I slowly accepted that wouldn't happen... not least because my feet were in agony.

It was the boots, I realized in the gap below Mt. Collins--those brand-new snow boots that had fit like gloves in the sea-level store were at least a size too small after 12 miles of hiking at >5000'. Feet expand as you walk on them, you see, and if you're not acclimated, everything swells up with altitude.

But what can you do, with five miles to go, but limp on?

So I did, doing my best not to literally drag my feet, and collapsed into my car around 5:30 pm--an hour and a half after I'd thought I'd return. The lot, empty eight hours before, was seething with sedentary car-tourists here to gawk at the view. I cursed them and their automotive laziness as I gingerly stripped off my boots. Yup, that was a half-inch blister on my right heel. Le Conte wasn't happening tomorrow. And that stupid ice axe had bruised both my hips.

Well, I guess I'll just have to come back next February for the rest of the Sixers...