The next weekend, I headed back to the Tye River Gap southwest of Charlottesville to hike the peaks I'd seen across the valley while hiking the Priest. That trio of summits, known as the Three Ridges, is accessible by a pleasantly challenging 13.1-mile loop along the AT and a side trail called the Mau-Har Trail.

Starting from the same parking lot, I crossed VA-56, then crossed the parallel Tye River along a cable bridge:


The trail wasted no time in gaining elevation--like their neighbor across the gap, the peaks of the Three Ridges stand 3000 feet above the valley floor. It switched me back and forth for a while, then led me along an ascending ridge through poplar stands and laurel copses:


Just under two miles in, I reached the junction with the Mau-Har Trail: 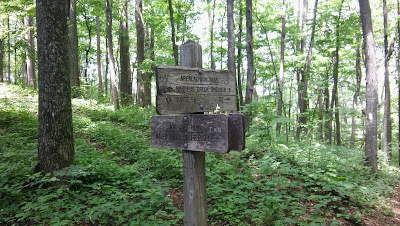 but continued east (and slightly downward, at first) around the mountain on the AT.

That stretch of trail took me through more woods and across several small streams:


Through the occasional gap in the trees, I could look back and see the far end of the ridge-bowl: 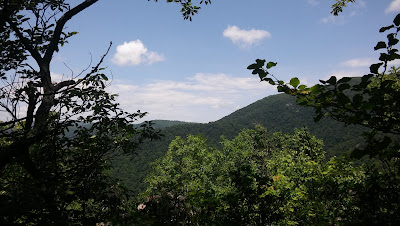 After a mile or so, I started encountering strips of boulders:


And then, after I'd passed a few of those, the trail curved up and onto the lowest of the three Ridges--and at the elbow of the curve was a little east-facing overlook. It wasn't too big, and the footing was tenuous: 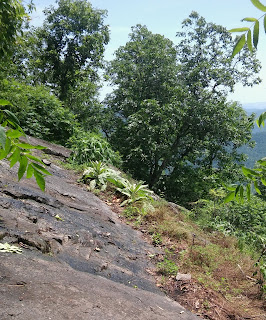 but the view was the nicest I'd had yet that day:


Just around the bend, though, was a much bigger patch of bare rock, from which I got my first clear view of the Priest.


From there, the trail continued along the ridgeline to the summit. It got fairly narrow in places: 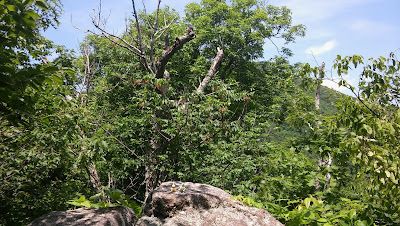 but never quite to knife-edge levels. (A few million years ago, though, this must have been a real fun route.) The gaps in the trees offered several minor viewpoints, but most of them were too overgrown to show anything worth photographing. Like the Priest, this hike might be best done in April or November.

The ridge stayed level for a bit, then it turned steep, breaking out into patches of Class 2 (though, of course, nothing that couldn't be done with an overnight pack, this being the AT and all). At last, it curved around the mountain and took a long series of short switchbacks up a forested slope: 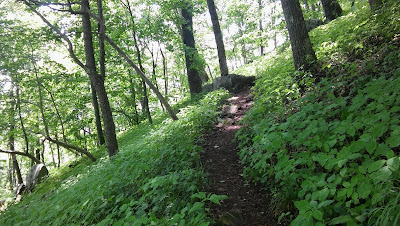 At the top of the slope was a nice little resting-spot:


From there, the trail continued through a bright, airy patch of rhododendrons that offered lots of nice backcountry campsites,


Somewhere along that stretch, I assume, was the summit--it wasn't marked in any obvious way. Not that I minded terribly; it was nice enough just being up at 3900'. 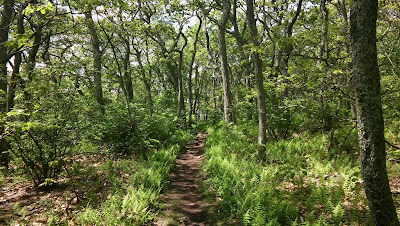 Eventually, the trail turned downward, and not long after it did, I came to the widest overlook on the mountain, a thirty-foot-wide patch of rippled gray stone:


I looked back along the ridge and saw the way I'd come:

Turning west, however, I saw some disconcerting clouds:


Those and a worsening sunburn sent me on my way before too long.

From there, the trail descended steadily, 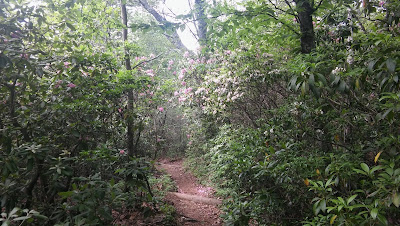 except for an unusually straight uphill stretch just long enough to remind me I hadn't eaten lunch yet. I gained the crest, sat down on a rock so conveniently placed that I can only assume someone put it there for just that purpose, and chowed down. Hunger is the best spice ever--my pita-bread sandwich tasted like cake.

Twenty minutes of downhill walking past that point, I emerged from the Three Ridges Wilderness into a manmade clearing: Maupin Field. 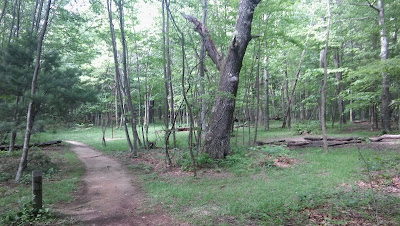 There was enough bare ground for several large groups to pitch their tents--does someone host retreats here? I followed the somewhat cryptic signs to a central junction: 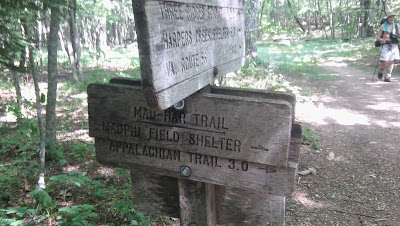 then headed down to the Maupin Field shelter, where the Mau-Har trail began:


That trail started off with a steep downhill stretch of dirt that ended in a stream crossing. Which, like last weekend's, was completely submerged. This time, however, I found a fallen log a short ways downstream to cross on, so my shoes stayed dry for the moment: 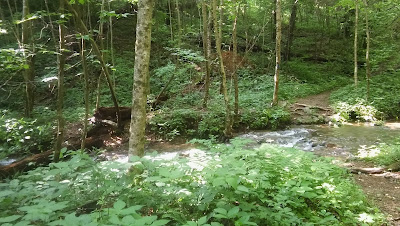 However, their dryness was not to last. Before long I came to another stream crossing, and then another, and then the trail turned down a steep, narrow valley filled with a particularly strong stream which, in its rain-swollen vigor, seemed to have decided to annex half the trail. All that was left to walk on was a thin strip of rocks: 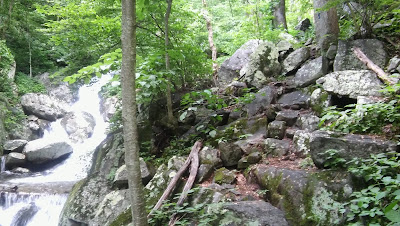 at times beside the stream, at times above it, but always within spraying distance. I could see why the trail was recommended for waterfall fans:


Needless to say, I did a fair amount of slipping on those wet rocks. If you do this hike, I'd definitely recommend the Mar-Hau Trail for ascent rather than descent, particularly after a heavy rain.

Midway down the trail, I came to a turnoff for an Official Waterfall Overlook,


but I was kind of waterfalled out by that point, so I passed it by.


From there, the trail turned... uphill. For quite a while, too, up some fairly steep switchbacks, several of which were covered in (can you guess?) more waterfalls. As I huffed and puffed my way back up the mountainside, I wondered why the trail had bothered to drop us so far down--below even the lower AT junction, as far as I could tell. (Perhaps someone designed the trail on a sabbatical from Maine?)

I stopped to rest on a log most of the way up that stretch:


but a distant roll of thunder spurred me on.

I crested a ridge, expecting to see the AT junction through the trees--but no, there was another valley to cross first. 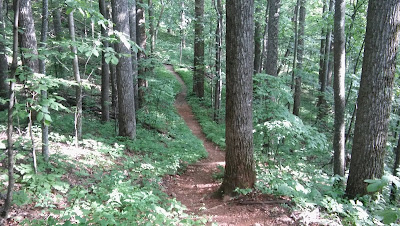 This one, at least, was relatively shallow, and the stream running through it was little more than a trickle. The ridge on the far side was lower than the last, too. I climbed around it, hopped a fallen tree, and found myself back at the saddle where the two trails split.


From there, thankfully, it was all downhill.


As I descended, I heard some sort of thrush calling in the vicinity--not quite a Veery, but similar enough to get me thinking about those birds and the shock I'd felt when I'd first heard them, in a grove of pines halfway up Mt. Mitchell, the first 3000-foot, trans-ecosystem ascent I'd ever done alone. I'd paused there and looked up, listening to those strange metallic calls, and realized that I was in a place wholly foreign to the bright familiar oak-woods below, that there was an entire world up on that mountain I had yet to experience. Anything at all could lie beyond that grove, or around that shoulder of the mountain--anything at all could be singing that song. And I realized now how very young I'd been then, back in those days when I'd seen a mountain as a whole rather than breaking it down into its component parts--a 13.1-mile mainly Class 1 loop with 4000 feet of elevation gain--back when I'd had no mental schema to project my experiences onto (and distort them--and lose bits of them--in the process), back when all I saw and felt was the single trail before me. Sure, I can people the mountains of my mind with all sorts of imagined mysteries--carnivorous leaf-sprites, sapient bears, rainbow birds, hidden valleys--but the fact remains that those mountains are already in my mind, already seen and known and understood. This is how the rocks fold; this is how the types of trees trade off; this is how the water runs; it could be no other way.

Perhaps it’s silly to lament the loss of wonder, the constant retreat of the unknown, when one spends one life actively pursuing and undoing it through study and exploration. But it is, still, in its own way a loss. I will never again be twenty-two years old, and I will never hear a Veery’s call with the same exhilaration I did then.

Feeling rather tired--and a bit old--I continued slowly down the ridge until I heard the Tye. Then came the switchbacks, then the bridge across the river, and then my hike was done. 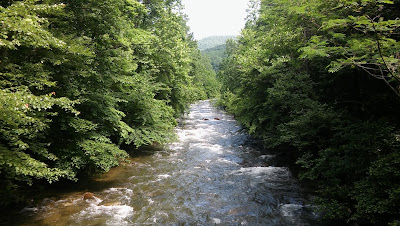