In the early autumn, I headed out to the Massanutten Mountains for a bit of weekend backpacking.

If you've never heard of them, the Massanuttens are a fifty-mile-long range (or a single fifty-mile-long mountain, depending on who you ask) smack-dab in the middle of the Shenandoah Valley. They're the easternmost in Virginia's slice of the Ridge-and-Valley Appalachians, a family of long, steep-sided, flat-topped ridges that pop up between the Blue Ridge and the Appalachian Plateau from southeastern New York to Alabama. Their shape is quite distinctive, as you'll see in this aerial photo (not my work):


But I grew up attending a summer camp in the Massanuttens, so until I was much older than I'd care to admit, I thought all mountains looked like that.

The range tops out at 2922', a thousand feet lower than its eastern neighbors. That altitude disparity, and the lack of roads and developed campgrounds atop the ridges, spare them the crowds that flock to Shenandoah National Park. But there's still plenty to see in the Massanuttens: the range is full of trails and gullies and scrambles and weird little microbiomes that range from quasi-krummholz to cacti.

After considering a couple of spots, I settled on Signal Knob, the northernmost tip of the range and a five-mile, ~1000' hike from the valley floor. I'd driven past the peak dozens of times (it's clearly visible from the single-digit miles of I-66), but I'd never stood on top of it.


Along the way, I stopped for gas in Front Royal, where an idea occurred to me. Wasn't the confluence of the North and South Forks of the Shenandoah River right around here? I checked the maps, and sure enough, it was--and you know how I'm a sucker for points of geographic interest.

The only question was how to get there from the road (US-522, if you're following along). There didn't seem to be a park at the confluence (or anywhere to park, for that matter), so I tucked my car into a church parking lot and set off on foot through the neighborhood. I came across some railroad tracks that crossed the river just south of the confluence:


but without knowing the local train schedule, I didn't have the guts to follow them down to the river. Next I snuck through a campground to the bank of the South Fork, but the vegetation was too thick for me to get any closer. I tried a third approach, along a private road through a neighborhood of mobile homes... but when I finally reached the point, it was fenced off: 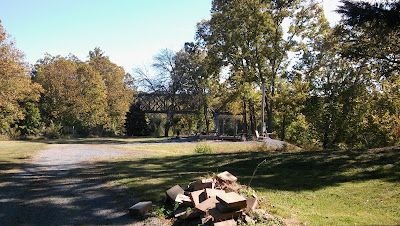 I drove west from there, then turned south onto Fort Valley Road, the main road traversing the valley inside the northern Massanuttens. It led me through the narrow gap at the mountains' northern tip, crowding so close to the adjacent creek that a loose turn would have sent my car for a swim. Before long I arrived at the trailhead--there was plenty of parking here, at least--and started up:


The first mile-and-change was a slog:


which I blame entirely on my backpack. In retrospect, I'm not sure why I decided to make this trip an overnight. I could easily have done the ten-mile round trip to the Knob in a day--and I passed several slower parties who were doing just that. Maybe I just wanted to prove I could still handle a night in the woods after an all-too-suburban summer.

The trail itself, as I said, was gorgeous. It crept north along the mountainside, slowly but steadily gaining elevation: 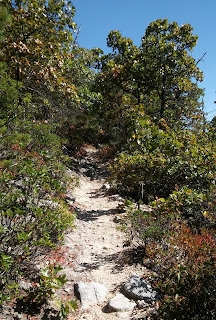 The first good view came from a gap in the trees about three-quarters of a mile up:


So far, I hadn't passed a single group of hikers--or, rather, they hadn't passed me. That all changed when I reached Buzzard Rock Overlook--the first named point on the trail and the first camp-able spot out of range of road noise--and found myself surrounded by a group of garrulous teenagers on their way down. I waited until they'd left, then stashed my overnight gear behind a spine of rocks:


Free of my burden, I picked up the pace quite a bit. Things were going great: nothing but day pack, the trail, and me... and a hundred thousand rocks to step over.


But the leaves hadn't fallen yet, so I could at least see where the rocks were. The trees were starting to turn, though--I figure it was a week, maybe two, off from peak fall colors.

A half-mile up the trail, I came to a second overlook, this one facing directly down the valley:


I lingered quite a while, looking out over the hazy hills: 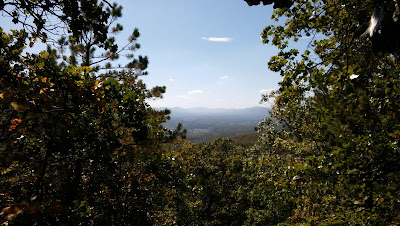 but not too long--I was still quite a ways off from the Knob.

The higher I climbed, the more colorful the trees became:


Three miles out, I gained the ridge, and the trail turned west and leveled off:


There were at least a half-dozen much nicer campsites along this stretch of the trail; if I'd known those were there, I would have brought my pack up past the first one.


A mile later, I caught my first glimpse of the Knob from above:


The trail swung north again and took me down across that connecting ridge... and into a clearing full of broadcasting equipment:


I paused there to take in the eastward view:


and then continued on to the overlook proper: 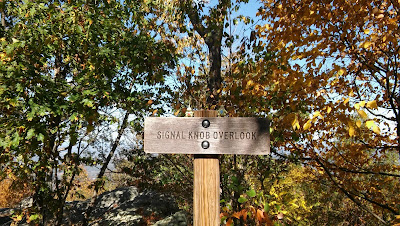 And let me tell you--there's no better view than from a mountain in the middle of a valley. I-81, the town of Strasburg, Great North Mountain in the distance... it was all laid out before me like a model landscape on the table.


I feasted my eyes for quite a while, then headed back the way I'd come. (I'd have liked to vary things up, but while there were multiple ways back to the trailhead from the Knob, there was only one way back to my overnight pack.) The trail was a bit more crowded than on the way up--that's when I passed most of the day-hikers mentioned earlier--but it was still fairly empty for a sunny October weekend.

By the time I made it back to the overlook, the sun was beginning to set: 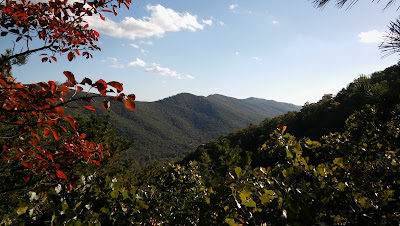 I retrieved my pack, guzzled down half a liter of water from my backup bottle (it had been unseasonably warm all afternoon), and set about settling in for the night. A few minutes in, I realized I'd be sharing the site with a sizeable hive of wasps, as when I'd camped beneath Borah Peak. Not the most fun, but that spot was the only flat ground in the vicinity, so I figured I'd just tough it out.

The wasps settled down as darkness fell, but the wind picked up... and picked up... and kept on picking up until the gusts were blowing the walls of my tent right into my face. You'd think I'd have learned my lesson about trying to camp in a gap back on Mt. Rogers, but I guess that one needed two rounds to sink in. An hour after dark, I finally just gave up, deboned my tent, and carried it downhill to a sloped-but-shielded backup site below the ridge.

I slept fitfully, as always, and woke the next morning to a drizzle:


in which I hiked out. Not the most exciting end to my Massanutten excursion, but hey--someone's got to water all those trees: 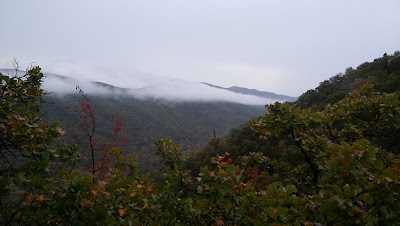