My friend and I did eventually make it out to Rattlesnake Ledge, and it was exactly what you'd expect of the North Cascades in late autumn: foggy, wet, and covered in moss.

The trail began in Rattlesnake Lake State Park, 45 minutes southwest of Redmond and just off I-90. There was no obvious hiker parking, so we followed the loop road through the park and wound up in a boat trailer spot. It was cool, though; the place was practically deserted, despite it being a Saturday.

From there we moseyed down to the lakeshore to get our bearings:


The shallows of the lake were full of giant stumps, remnants of the old-growth forest that once covered the lower reaches of the Cascades:


Despite the name, there aren't actually any rattlesnakes in the Park, as I learned from a nearby sign. Makes sense--if I were cold-blooded, the cloudy, chilly Pacific Northwest is the last place I'd want to live. The place was named by a cheeky early settler named Arthur Denny after a rustling seed pod startled a fellow member of his survey crew into thinking he was being attacked by a rattler. (Not that that's never happened to me...)

My friend and I followed the shore towards the ledge, then wandered through the picnic area until we found a path heading into the woods:


A quarter-mile later, we arrived at the trailhead: 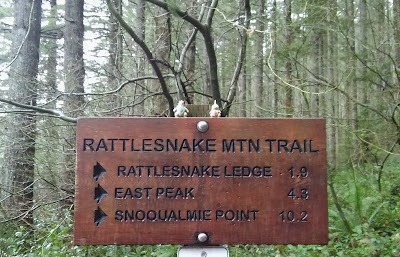 As the signs there announced (public recreation areas are very well-labeled out here), the park is part of the Mountains to Sound Greenway, a landscape of open space that follows I-90 from Seattle to Ellensburg, WA. The 100-mile corridor contains an impressive variety of habitats, from the waters of Puget Sound and the lush, temperate river valleys that feed it to the alpine regions of the Cascades and the cold, arid shrub steppes in their rainshadow (more on those in a later post). Though not noted for their height, the North Cascades are one of the steepest ranges in the world, and their sudden rise traps moisture rolling in from the Pacific like so:


The resulting precipitation (hundreds of inches of snow each year) makes for great skiing, as my friend assures me, but gloomy weather down below, tricky mountaineering up above, and white-knuckle driving through (again, more on that next time).

Our target today, however, was only a foothill.

The trail to the Ledge began with a gentle rise through the forest. The trees around us: hemlock, red cedar, and Douglas firs, were tall and thin:


and the ground was covered in ferns and mossy boulders like something out of a dinosaur movie:


Before long the trail swerved south to switchback up the mountainside. Moss-laden limbs arched above us, turning the trail into a tunnel: 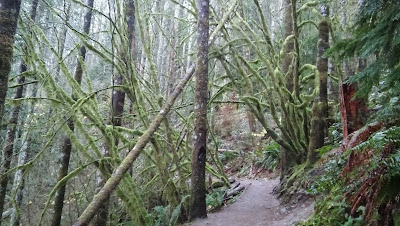 Halfway to the Ledge, we stopped for a break at a clearing alongside the trail. My friend sat down to rest his legs, and I took in the view:


...and it's a good thing I broke my "don't bother taking pictures on the way up" rule and snapped that one then, because that through-the-trees shot turned out to be the clearest view we'd get of the Cascades all day.

A few minutes after we started up again, a mist began to fall. Like many rains out here, it began as a subtle thickening of the ambient moisture, fading in almost imperceptibly as we climbed through the trees. But by the time we'd reached the ridge, the sightlines had shrunk to a few hundred feet.


The mist was fairly cold, too, this being December and all; it quickly sapped the heat we'd built while climbing.

And thus a gloomy prospect awaited us at the Ledge:


My friend, who has a reasonable attitude towards heights and inclement weather, stayed under cover, but I climbed out from the trees for a better look--carefully, though. As I'd learned while researching the hike, there had been three fatal falls here within the past ten years (though one ought to keep in mind that any hike as gentle and as close to a metropolitan area as this one will draw a lot of inexperienced and/or intoxicated hikers). The Ledge looked wide enough to me, but wet rocks can send even the most sure-footed scramblers sliding to their deaths.

Keeping away from the edge, I peered out through the haze. The Cascades had done their usual disappearing act:


Even the lake, only a thousand feet below, was half-hidden: 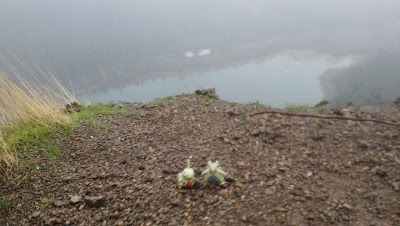 Welp, it seemed that was all we'd get from the Ledge that day. I scrambled up to my friend, and we hustled back down the trail before it decided to rain in earnest. 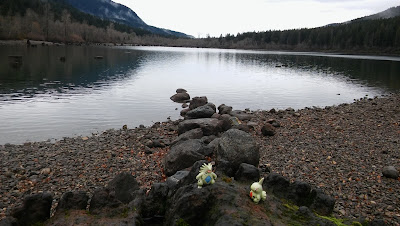