Adventures in Moisture Management, or How Not to Store Your Gear

So the friend I stayed with up in Redmond has a nifty little place by the shores of Lake Sammamish: 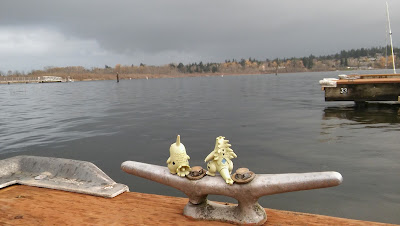 It's in a pretty nice neighborhood (if a bit crowded for my tastes), and there's a huge park a mile or so up the road with just about everything one could ask for: playgrounds, sports fields, historic buildings, a birdwatching trail, a leash-free area for dogs (they briefly coincide, which leads to some interesting interactions), a velodrome, and even a climbing wall:


All in all, the place was quite lovely for my first month and a half there: 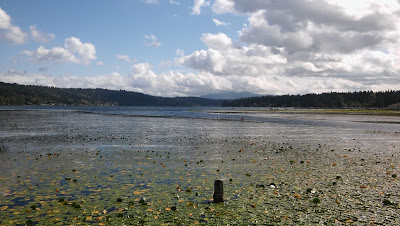 But as September drew to a close, the days grew overcast. To the east, the Cascade Range hid itself in a heavy haze. Clouds rolled in from the Pacific, clustering above us like schoolchildren after a summer apart.

And then, at the stroke of midnight on October 1, the rain began.

And that was the weather for the next two months. Every day it rained for at least a few hours: not always heavy rain, mind you, but enough to keep the relative humidity around 110%. Even when it wasn't actively precipitating, the clouds loitered overhead like coffee-drinkers in the magazine section of my old bookstore. LarLar can count the number of clear-skied days we saw in November on one hand...


Now I know what you're thinking: what's a little drizzle to a hardcore mountaineer like me? I've slogged up the high peaks of the Northeast in much worse conditions. No, the rain knew better than to mess with me.

It went for my baby instead: 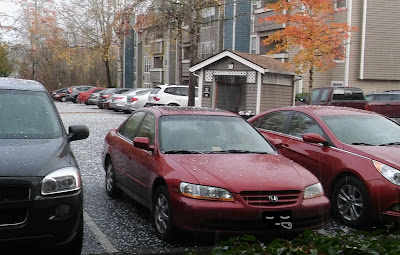 A week into the rainy season, I climbed into my car and saw an inch-deep puddle of water in the backseat footwell. Or rather, I smelled it--my old running shoes had been soaking in it for a couple of days:


After an hour of frantic sponging, I'd pulled a good two gallons of water out of the footwell:


Nothing in the car was ruined, thankfully, but the ordeal left me worried. I had no idea how that water had gotten inside my car. My friend and I tested every conceivable surface: the sun roof, the front and back windshields, the side windows, and even the hood: 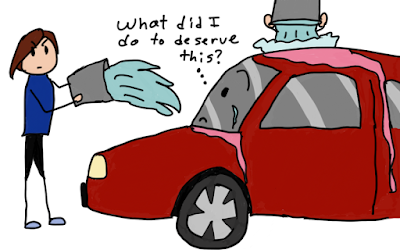 but all we got was a few funny looks from the neighbors. We couldn't replicate the leak. The only problem I found was a spot where the rear door's weatherstripping had come loose. I glued it back in place and hoped that would solve matters.

It didn't. The puddle was back after the next rainfall, confined, as before, to the left rear footwell. I drained the water again, because nobody wants a swimming pool in their backseat:


but what else could I do? The logical thing, I suppose, would have been to take it to a mechanic--but those dudes charge money.

Lacking that, I got creative.

I took some strips of paper, drew a line in red marker down the length of them, and taped them all along the left edge of the car like an IRL Cleanse Tag. The water, I reasoned, couldn't pass over the paper without smearing the ink. All I had to do was check the car after the next rainstorm, and I'd find out exactly where it was coming from.

The answer, of course, was "nowhere I'd taped a strip." I pulled them up with a sigh and drained the footwell a third time. The only option left was to sit out a rainstorm in the car and see for myself how the water got in.

I intended to do this for quite a while, but it always seemed to rain overnight, or while I was in a rush to finish something, or so lightly that I couldn't see the water coming in, or so briefly that I missed the shower. Days turned to weeks as the rain furtively fell; draining the footwell every few days became a habit. The act was oddly satisfying... in a useless, you-know-you're-doing-more-harm-than-good sort of way, like popping pimples or pulling threads out of clothing. I couldn't keep bailing forever, I knew, but I'd get to the bottom of it just as soon as the next perfectly-timed rainstorm hit...

Meanwhile, I'd been trying for weeks to drag my friend up to the Cascades for a hike. I'd found the perfect trail to suit both the exposure-junkie in me and the desk-jobbing programmer in him: Rattlesnake Ledge, a two-mile hike just south of I-90 that climbs 1000 feet to a ledge overlooking a lake. On a clear day one could see all the way to the high peaks of the Cascades... and a clear day was just what the weatherfolks had predicted for the Friday after Thanksgiving.

That morning, I shook him awake, then bounced outside to fetch my hiking clothes from my trunk, where I'd left them (along with the rest of my camping gear) ever since the summer. The sun was shining, the bald eagles were chirping (they really are just overgrown seagulls at heart), and I was ready to get out of town and do some climbing.

But when I popped the trunk, I found my down jacket covered in tiny patches of white stuff. I assumed it was only loose down and picked it up to shake the feathers off... but beneath it lay a science experiment. 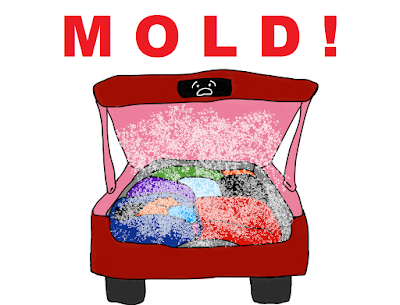 Once I'd worn myself out running around the parking lot and gibbering like a maniac, I slunk back to assess the problem. The jacket, my day pack, and my entire duffel bag of hiking clothes were covered in fuzzy white mold. The rest of my stuff looked fine, but seeing as it had been cooped up in that (apparently airtight) trunk for months with this mess, it was almost certainly saturated with spores. So I emptied the trunk and hauled its contents over to air on the patio, then queried The Google as to how to fix things.

As I learned (from several helpful sites, including this one), mold is highly pH-sensitive; any strong acid or base will scour it away and keep it from growing back. Just what I needed. 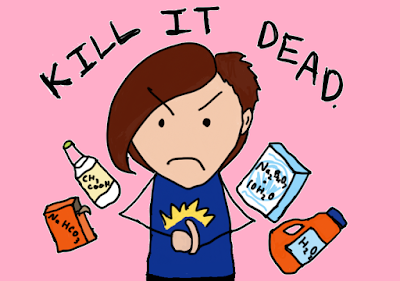 I postponed my hiking plans, hit up the local stores for cleaning supplies (rubber gloves, vinegar, borax, paper towels, and a plastic tub for soaking), and set to work developing an official... 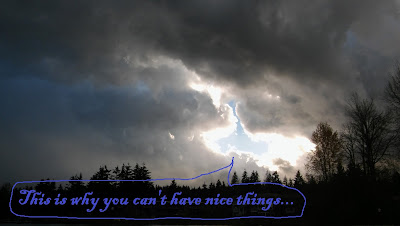 ...and feeding my gear through the process.

After two days of soaking, wiping, loading, fetching, and drying, it all came out more or less unharmed, though it smelled like I'd camped outside an Easter-egg-dyeing convention for a week. Things could have been much worse, though--that mold could have spread to the leaking interior. I'm honestly surprised it didn't; I'm guessing either there's no way through from the trunk to the rest of the car, or what little daylight we had was enough to do the mold in.

But as I was checking the interior for mold intrusions, I happened across the source of the leak: the front left door! Its weatherstripping was just as loose as the rear door's had been; the water was seeping in through there, then sliding underneath the front seat to the rear footwell. So I glued that up, and the leaking stopped...

....just in time, because next week came the first frost.