Arceus, that last post was long. I'm never going to post a 4000-worder again... and, honestly, I could say the same for crossing a continent by car in six days. But the trail goes on, and the hikes continue.

For a while now, whenever I've told people either that I'm from Virginia (while climbing a mountain) or that I climb mountains (while in Virginia), they've always asked if I've climbed Old Rag Mountain. I'd heard of it, of course: that it was one of the most-hiked trails in Shenandoah National Park, so popular that lines formed on the way to the summit on clear summer days, and that it ended in a mile-long rock scramble (over what, little crumbly rocks? How tough could it be if it was below treeline in Virginia?). But until recently, I'd never felt the urge to climb it, mostly due to those notorious crowds. What made that mountain any better than the several dozen other peaks in SNP? All that praise had to be hype, and all those hikers just a bunch of trend-following, day-tripping yuppies too lazy to look up other hikes in the area.

But when I finally pushed myself out to see Old Rag this (unseasonably warm) January, I learned I was wrong... oh, boy, was I wrong.

(New readers: that's kind of a theme of this blog, me being wrong about things.)

The trail up Old Rag begins at the mountain's dedicated trailhead/parking lot, three quarters of the way up VA-600 on the east side of SNP, just south of Sperryville. My middle brother (still on break from college) and I arrived around noon to find it nearly empty:


There was a $10/person fee at the self-registration kiosk, which seemed exorbitant for off-season use, but we paid up anyway.


From there, we had to walk another half-mile up a paved road to get to the actual trailhead. The houses faded out halfway along, leaving a buffer zone of trees between them and the park boundary.


Shenandoah National Park, of which you'll no doubt see much more in later posts, is a long, thin stretch of land that covers the Blue Ridge Mountains (the front range of the Appalachians) south from Front Royal to Afton Gap, where the George Washington National Forest takes over. Its most famous attraction is Skyline Drive, a scenic highway that traverses the ridge, but it also contains 100 miles of the Appalachian Trail and several day hikes accessible from trailheads scattered around the edge of the park.

A few minutes later, we arrived at the boundary:


where we were passed by the first of a handful of hikers we'd see that day, a fit older guy who seemed to know the area well.

The first half of the trail was a gentle, lightly sloped walk through the deciduous forest typical of the Virginia Blue Ridge. Eventually we hit some switchbacks: 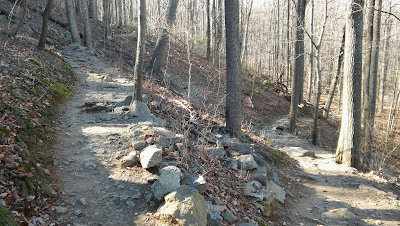 but even those weren't all that rough. The forest was scattered with giant boulders:


As we neared the top of the mountain, the woods took on an airy feel. Every so often, we came to a gap in the trees:


At last, two and a half miles in, we came to the start of the scramble:


And when they said it went on for a mile, they weren't kidding:


We clambered over those, then came to... well, it seemed to be a ten-foot drop:


Brother and I stood there for a moment, searching for a way down that didn't involve placing blind trust in gravity. But the fit guy ahead of us, overhearing our confusion, popped his head around a boulder and pointed out the ladderlike holes recessed into the wall we stood on--ones that were, quite conveniently, invisible from our vantage point.

So we climbed down, wedged our way out of that cleft and around a boulder on the downward-sloping one beneath it--the one part of the trail that felt dangerously exposed to me--and continued on. I looked back every so often to make sure Brother was doing all right, but the squeezy crevices and giant, featureless boulders barely fazed him. I, on the other hand, with my fat behind, full pack, and foot-shorter wingspan... eh, let's just say Old Rag is not kind to the vertically-challenged.


In light of how I'd underestimated this peak, it's a good thing the weather wasn't any worse than 45 degrees and breezy. Had there been any ice at all, this would have been a mixed climb requiring crampons, not something I'd have made it through alone. And I could definitely see how lines would form at several of these features in the summer, even with only moderate crowding.


But Old Rag wasn't without its attractions, like this lean-to we climbed through: 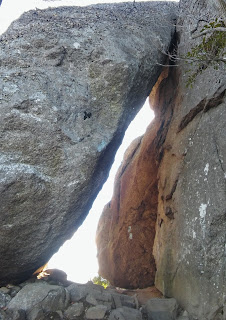 and these natural stairs formed by a basalt intrusion into the crack in that granite boulder:


And, of course, the view was superb:


Forty minutes later, we arrived at the summit... and were nearly blown off by massive gusts of wind from the west:


I swear, it was worse than both times I’d been up Mt. Washington.

I didn't see a USGS marker marking an official summit, but I admit I didn't look very hard, what with the wind and all. Brother and I rested briefly beside the summit sign, then continued on.


Rather than descend by the scramble, we took the long way down, following the Saddle Trail across the mountain and around to the Old Rag Fire Road that curls around to the north.

The trail settled back into a gentle Class 1 soon after the summit, 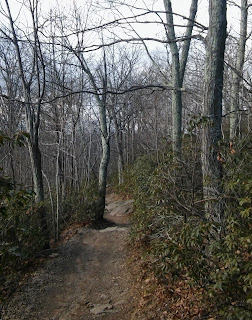 though there was still the occasional cliffside viewpoint:


We passed a couple of shelters (day-use only, as big angry signs reminded us):


then continued onto the fire road, which was so wide and well-graded that my car could have made it up:


That road took us on a mostly-flat course past the remains of Oldrag, VA, an abandoned town now engulfed by the park, and down a valley full of quick, clear streams fed by the occasional spring: 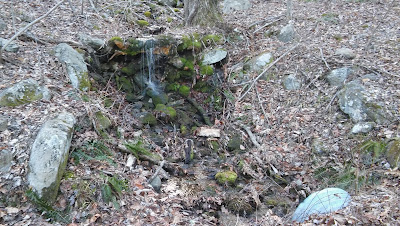 Looking up, we saw the summit lit by setting sun:


A mile or two later, we crossed over a bridge: 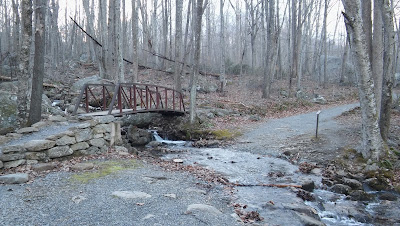 and found ourselves back at the trailhead.

From there, it was a short downhill walk back to the car. We returned around 5 pm, five hours after we'd set out. Fitter folks could probably shave an hour off that time; those who are skittish around heights or who like to dawdle at overlooks could easily add an hour or more.

Has Old Rag won another rabid fanatic? Not really--those slick boulders ain't my cup of tea. But it's the closest I've seen in Virginia to real mountaineering, and it's definitely worth hiking once if you're in the area... provided it's an overcast weekday.