In order to avoid the toll-heavy Pennsylvania Turnpike on my way to Ohio, I detoured through the dull, woodsy, modestly mountainous heart of Pennsylvania. Halfway through, I found myself in a strange little town with an inordinate fondness for deformed beavers: 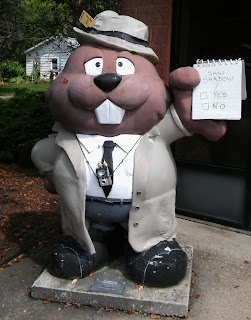 or so I first thought. A storefront on Main Street cleared up my confusion: 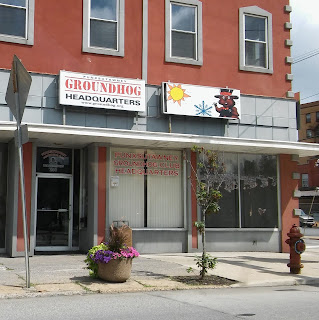 This wasn't just any Alleghenian hamlet. It was the weather capital of the world, a mecca for marmot prognostication, and home to the most famous of my mutant mountain groundhogs' untainted brethren: Punxsutawney, PA.

And so, after checking my map, I backtracked to that holy hill southeast of town where the Phillian line declares their annual prediction: 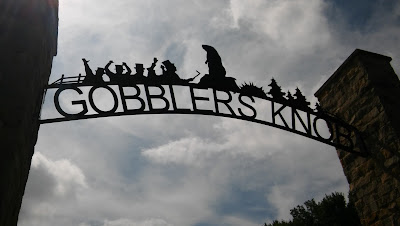 For the few of my readers unfamiliar with Groundhog Day, each year on February 2nd the citizens of Punxsutawney gather on Gobbler's Knob to watch the town's groundhog mascot, Punxsutawney Phil, emerge from his burrow. If Phil sees his shadow, legend claims they're in for six more weeks of wintry weather; if not, spring will come early. Based on an old German tradition in which clear skies on Candlemas day foretold a long winter, the holiday was imported to the States by German settlers, and the duty of shadow-seeing transferred from the European hedgehog to the North American groundhog. The Punxsutawney Groundhog Club first celebrated the holiday in 1887, and has carried out the local ceremonies ever since.

Gobbler's Knob was somewhat smaller than I'd expected. I attributed this at first to creative camera angles in Groundhog Day, but I later learned that the film had been shot in a completely different town.

The real Knob was half groundhog monument, half municipal park. Tourists gathered around the signs: 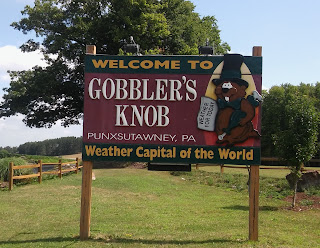 as children played soccer in the field atop the hill. I pulled into the park's small gravel lot, then stepped out to look around. There wasn't much to see this time of year: a sign-wall explaining the Groundhog Day tradition, a few more sculpted 'hogs, and the stage from which Phil speaks: 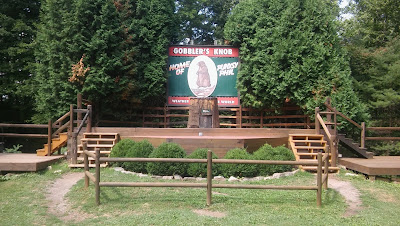 In his absence (he's kept in town through the summer and cared for by the Groundhog Club), the Lars scurried up to take his place:

but, being rock-types, they didn't have a clue about the impending weather. No sandstorms, that's all they could say. Oh well. I'll be fine as long as I get six more weeks of snow-free climbing.